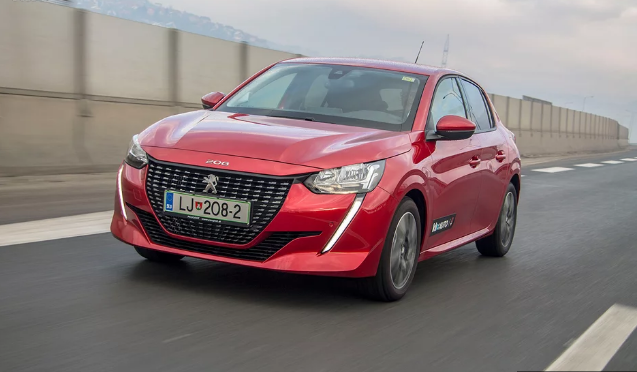 The time we spent with the new second generation of the Peugeot 208 gives us the right to claim that the French PSA-led car company could again be in sweet trouble, as the new 208 will surely follow in the footsteps of the bestseller 206, whose demand was high larger than Peugeot’s then production capacity.

With most of the distinctive elements that embellish the body of current Peugeot models, the harmoniously tailored 208 can not go unnoticed, and with interesting details completely declaring some of the competing models offered come from some other car companies. With a complete departure from the look of its predecessor, which bore the same number plate, which they did not do in Renault when drawing the current Clio, the new 208 is currently the most interesting car to come from France. Yes, Citroën has refreshed the C3 in the meantime, but the weather still left a mark on their colorful cheerful car.

At a time when LED lights are increasingly becoming an indispensable “analogy” piece of equipment in the cases of the latest Lavic with the Allure equipment package, the overall impression is somewhat spoiled, as the front LEDs in the much more attractive housings remain a privilege in the next package of equipment. On the rest of the two-body body with numerous black details and interestingly profiled sheet metal on the rear roof rails, we would not change anything, and the thought of possibly larger wheels was suppressed because of the demonstrated comfort, which was no doubt contributed by the 16-inch tires with a slightly higher profile.

The interior has been redesigned and preferably dark, with interesting, carbon-related graphics and distinctive elements used in current Peugeot models, plus the latest edition of the original i-Cockpit dashboard (digital and variable in this case) with a three-dimensional rider effect and here they look above the steering wheel with an eminently small diameter.

Although it may seem different at first glance, with the seat and steering wheel properly adjusted, which is the first prerequisite for a good ride, the upper part of the steering wheel will not cover the instrument panel, which can be blue, red, with or without individual gauges … High quality materials and excellent finishing controls provided an environment without crickets, which we have been particularly looking forward to, due to many bad experiences lately. Less pleased that the cabin’s heating / cooling controls remain here on the central display of the multimedia system, which negatively affects the overall ergonomics.

There are exceptions to the truth, but this car is also among most B-segment models that will offer ample space in all directions for four adults, assuming that the driver who does not want to give up the optimally adjusted seat is not extremely tall. Otherwise, the 208 becomes a sofa. Someone said, “Well, what a McLaren F1 concept!” the car.

Why do we sincerely hope that 208 will also get the GTI option in the near future? Because we have not driven a well-balanced ordinary car in a long time, whose suspension ensures excellent handling and impeccable comfort, and its highest rating is due to the silence in which it fights and fights with everything and everything that comes under the wheels. Then we remembered some of the much more expensive cars where, on similarly broken and wrinkled surfaces, we thought we would lose some of the side windows by the vibrations that were being transmitted to the body.

With a reminder that the new 208 is one of the few models already available in a variant powered by an electric motor only (e-208), the PSA also in this story under the front cover (justifiably) incorporates its well-known and extra-smooth 1.2-liter three-cylinder engine (PureTech) offered with three power levels. Fans of traditional solutions will probably not like that the more powerful turbocharged version (130 hp) can not be obtained in combination with a manual transmission, and Peugeot also retained one turbo diesel option with a cylinder more.

Our specimen was powered by a weaker turbocharger offering 102 bhp and 205 NmThe largest rotary engine for distribution is the six-speed manual transmission. Slightly weaker than the same engine built into the C3, a lightweight and fuel-efficient engine that is absolutely free of the characteristic three-cylinder vibrations proved that the deflection in the “stud” is not really a problem here, and behind pretty good performance in all situations is the fact that The 208 is among the lightest cars in its segment. Before making the decision to choose a 1.5-liter turbo diesel engine (100 bhp), potential buyers should know that on the end of the story, with the start / stop system and the “Eco” work program we used in congested urban conditions, we spent less on average from five liters after 100 kilometers. Well now…

We still do not know if the new 208 on the larger 17-inch wheels will cope equally quietly and smoothly on our roads. We do not even know when the 208 GTI will arrive, which could even obliterate the legendary 205 GTI, but we know that Peugeot has returned to the B segment in grand style and we are glad about that.

2 thoughts on “We tested the new Peugeot 208: Doomed to success”