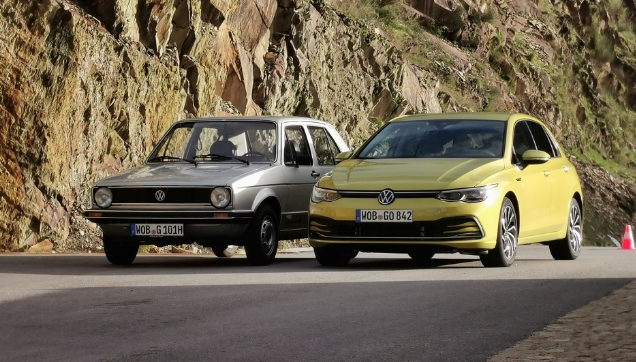 As stated earlier, the eighth generation Golf has been a long time coming, but it was definitely worth it. Volkswagen has announced that it wants to revolutionize the compact car segment with the new model, and it can be said that the promise has been fulfilled. The Eight fulfilled its mission, though it is not exactly a revolution over the “week”, despite numerous innovations, but rather an evolution, just like the German company used to us. The recipe is good and tested and the result is fantastic.

Attractive and practical, true to tradition

The Golf model is Volkswagen’s bestseller, which has long since grown into a legend, first appearing 45 years ago and has sold over 35 million units to date. The fact that every 40 seconds a Golf is sold is almost unbelievable, and it speaks volumes about what brand, what icon in the world of motoring it is. Golf has always been a car adorned with a blend of economy, practicality and timelessly attractive design, and today it is one of the most innovative and progressive compact cars ever.

The new Golf, thanks to its body design, looks quite aggressive and sporty, which is largely the result of working in an air tunnel where the drag coefficient is reduced from 0.3 to 0.275. Improved aerodynamics have reduced fuel consumption compared to the previous generation, as well as CO2 emissions, the car is surprisingly quiet and more comfortable to drive. Although modified and more modern, the silhouette is still recognizable, which is what VW fans actually like.

Attractive and useful are certainly the new headlights and taillights with LED technology, which has replaced the conventional conventional in all versions. The so-called IQ.LIGHT lights use LED matrix technology that enhances visibility and safety, especially when driving night-time when turning night-to-day, but without disturbing other road users as they adapt to the conditions. Dynamic direction indicators are integrated into LED daytime running lights. Golfs are now beautified and rims available in sizes 15 to 18 inches.

The interior represents the transition between the seventh generation of the Golf and the ID.3, the “classic” and the future of motoring. It is focused on a person with the intention of “feeling at home” and almost completely digitized, as reflected in the digital cluster, infotainment system screen and numerous touch controls that replaced the physical buttons. The same technology was used to activate the lights and even the panoramic roof, which opens and closes with one finger on the slider, as well as lighting, which at the touch of a finger lights up, adjusts and exits, and for heating or cooling. The systems of the new Golf can also be controlled by voice commands that are activated by saying the word “Hello Volkswagen”.

The driver is also provided with a head-up display that offers him the most important information such as vehicle speed, speed limits, navigation and the like. It can also adapt the car to its needs, and if the vehicle is used by more than one person, each can access specific settings. We tried out some of these features, got to know each other quickly, and are really used to the new Golf, which is an advanced and complex product but still easy to use.

The driver and passengers are seated in comfortable seats with perfectly good lateral support, which is well balanced in terms of softness / hardness, enough space in the front and rear of the cabin, thanks to the dimensions of the car 4.284 (29mm increase), 1.779 wide (increase 10 mm), height 1,456 (4 mm increase) and wheelbase 2,637 mm, which is based on the latest version of the MQB platform. The boot capacity is 380 liters or 1,237 liters with the rear seats folded down. Getting into the car is easy, and the new generation is available exclusively in the five-door version. An enjoyable ride is also enhanced by the automatic three-zone air conditioning with various functions.

Music lovers who purchase the new Golf will be able to enjoy the well-known and extremely high-quality 480W Harman Kardon sound system. While listening to music, they can “play” with ambient lighting that offers a choice of 32 colors, and one can choose from five mood modes of Infinity, Eternity, Euphoria, Vitality or Desire.

The interior itself is made of a combination of soft materials and hard, but high quality and “weighted” plastic present in the lower dashboard, center ridge and door panels. The flat-bottom multifunction steering wheel is ergonomically designed and has a heating function.

The eighth generation of Golf is well equipped and delivers advanced technology like the Travel Assist system, which can control steering, braking and accelerating on the highway at speeds up to 210 km / h. Even the basic model has a Lane Assist system that keeps the vehicle in the lane, a Front Assist with an automatic emergency braking system, and a pedestrian detection system. There’s also a Car2X system that collects and displays exceptional information sent by other vehicles within an 800-meter radius, alerting the driver to possible danger, a digital cockpit, an online infotainment system with a 8.25-inch touchscreen, a multifunction steering wheel and LED front and taillights. The range of similar backup and security systems in the more expensive versions is even wider.

Otherwise, the new Golf will be available with four trim levels, namely Golf, Life, Style and a sporty R-Line. All these packages bring richer equipment than the previous ones.

The driver’s position behind the wheel of the Golf is ideal, and the seat can easily be adjusted to a position that suits you using the side-mounted buttons. For maximum comfort and dynamism, the Adaptive Chassis Control (DCC) system is proven, which has proven to be “imperfect” and winding Portuguese roads, in which bends were barely noticeable even at higher speeds and were effectively absorbed when crossing bumps and holes. The sharp and precise steering provided a sense of full control of the vehicle, so it was fun to catch up with the locals who were not sparing their cars at all and operating them as if on rally sections.

The driver can choose the driving mode, and the choice is Comfort, Eco, Sport and Individual modes whose names speak enough for themselves.

Customers of the new Golf will have a large selection of engine options. As for gasoline, it will offer a three-cylinder 1.0-liter TSI of 90 and 110 hp, and a four-cylinder 1.5-liter TSI of 115 and 150 hp paired with a 6-speed manual transmission. The surprisingly muted diesel 2.0-liter engine will be available with 115 and 150 hp combined with a 6-speed manual or seven-speed DSG transmission.

But that’s not all, as three 48-volt mild hybrid systems have been prepared from Volkswagen, namely the 1.0-liter 110hp eTSi and the 1.5-liter eTSi delivering 130hp and 150hp and paired with a seven-speed DSG gearbox. Also included are plug-in hybrids, a 1.4-liter GTE that develops 204bhp and 245bhp, and comes with a seven-speed DSG transmission. There will be no full electric drive in the eighth generation, which is logical given the model ID.3.

More powerful models of the new Golf are coming over the next year, namely the GTI, GTI TCR, GTD, GTE and R. The power of these models will range from 250 to 400 hp.

The new Golf in BiH is coming next year, and prices are unknown so far. The seventh generation has been sold in 6 million units worldwide, and Volkswagen of the “eight” also has high expectations.