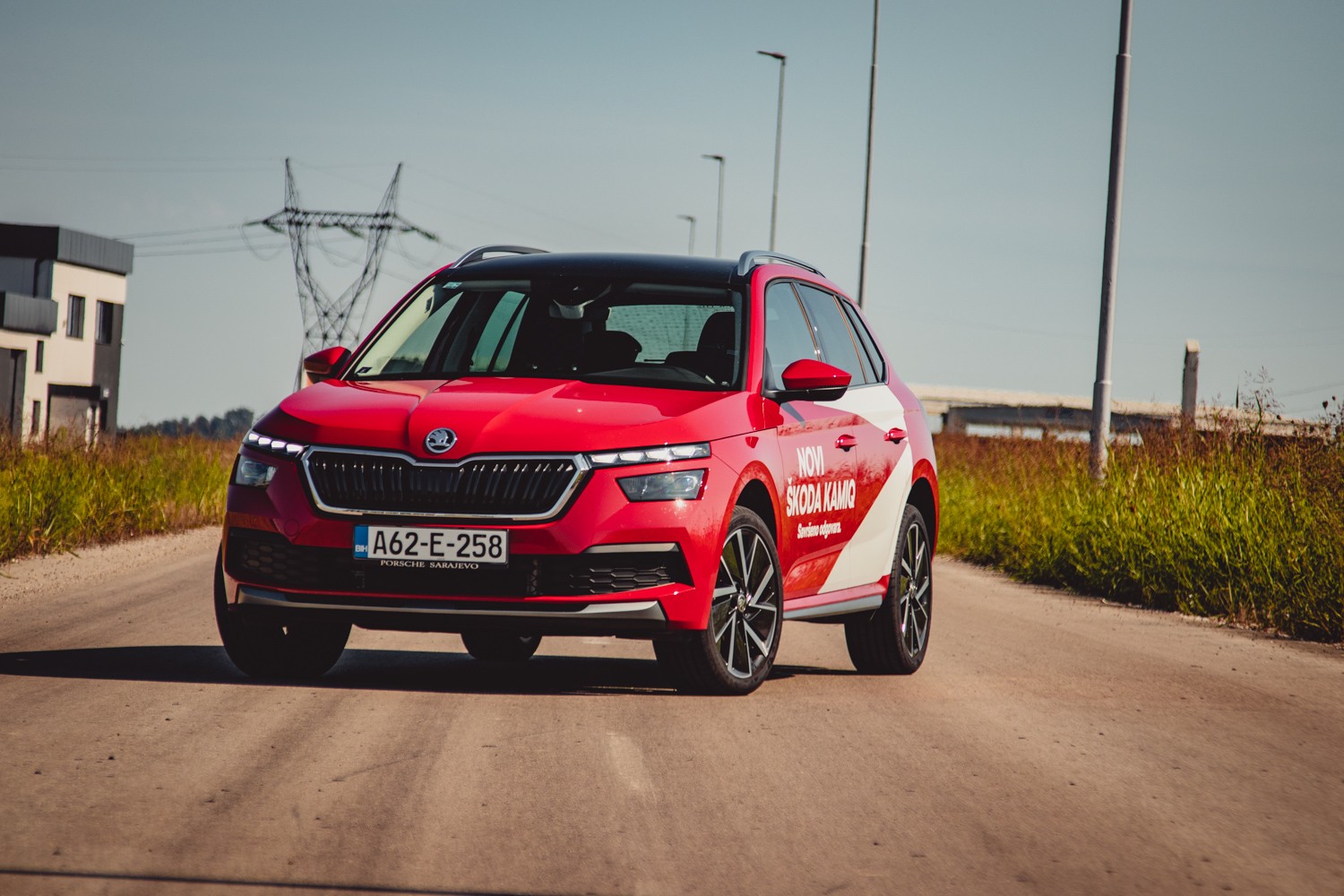 The charming Kamiq, the newest and smallest SUV in the Škoda family, arrived for the test. Since Volkswagen and Seat have their three SUV models on offer (T-Cross, T-Roc and Tiguante Arona, Ateca iTarraco), it is logical that Škoda also presented its third model with the interesting name Kamiq. Thanks to the modular MQB-A0 platform of the group, we have before us the latest trump card of the Czech manufacturer who will try to take action with models such as Captur, Kona, C3 Aircross and the like.

Design-wise, from the outside, Kamiq has taken on a number of features that can be found in the Karoq or Kodiaq models. Striking separate headlights in LED technology with four light elements, which are now also direction indicators, and below LED BASIC headlights. At the back, there are also LED lights with a characteristic C shape, and at an additional cost, the turn signals can also be dynamic. The front hood features accentuated three-dimensional lines of their SUV models, as well as a front grille with double bars on the grille where the emergency braking radar also failed to conceal. At first glance, the Kamiq looks like a rather small city crossover while its lines are similar to those found in the Karoqu which is “a number bigger”. Good ground clearance and well-designed side surfaces contribute to a robust look, and back, with an interesting diffuser design and a lack of “fake” exhaust pipes, there is another novelty. Instead of the Škoda logo, there are new letters “ŠKODA” as on the Scala and Superb models.

The interior of the Kamiq is taken directly from the new compact Scala model , which is certainly not a bad thing. The choice of materials used in the interior is ready to humiliate some larger models in the group while some details are above, for example, the French competition. Also, there is soft plastic on the armature, the cup holders are rubberized and there is also a leather-covered steering wheel and gear lever. In front of the driver are digital instruments (which come at an additional cost), and the controls for air conditioning and other functions are exactly where you would expect them to be. The driving position is excellent, the seats are well balanced and comfortable.

Pressing the ignition key starts the downsizing product; A 1.0-liter turbo petrol TSI engine that develops 115 hp and 200 Nm of torque in this car . Paired with a precise seven-speed DSG transmission, the Kamiq catches the “hundred” in 9.9 seconds, while the top speed is 194 km / h. The characteristic sound of the three-cylinder is maximally muffled up to 5,000 rpm, and the more decisive pressures of the Kamiqu accelerator pedal also don’t bother. This way, the motorist can “rush” on the highway. The average consumption on the test was around 6.5 liters .

From a safety point of view, Škoda does not disappoint here either. Ambition comes standard with Front Assist (collision avoidance system), Lane Assist (lane keeping system), cruise control and speed limiter, as well as automatic high beam control. There are also the already mentioned LED Basic lights , and it is possible to pay extra for LED AFS lights that follow the turns and have automatic beam leveling.

All-wheel drive is not on offer, and fans of the automatic transmission will have to reach a little deeper into their pockets. This brings us to the price, which is certainly within this class. Škoda Kamiq as an introductory model costs 29,900 KM, and from the equipment and motorization it offers everything that will delight every driver. While the test model is 50,900 KM.