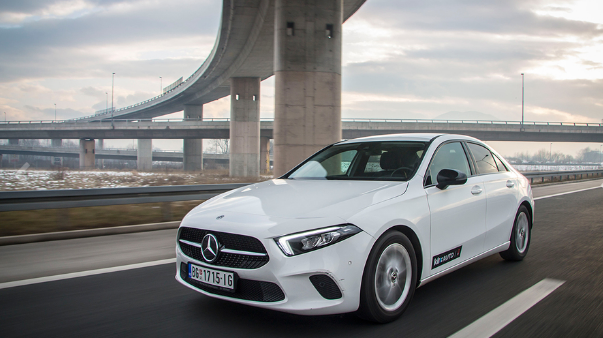 A few generations later, this idea was significantly expanded, and we checked that it is so affordable and at the same time that it justifies all the qualities we are used to from Mercedes-Benz.

Little by little the A-Class lost its original compact form. Basically, the ingenious concept of a mono-volume body that was extremely practical to the market was not so much liked, as evidenced by the third-generation A-Class, which sold significantly better than the previous two. In addition to the new philosophy of the basic model, Mercedes-Benz has offered other body shapes, and now the fourth-generation A-Class offers something for everyone.

First and foremost it is important to distinguish between the CLA and A-Class Sedan we had in the test. Although at first glance they look like too similar cars to make sense at the same time, they are both models for different buyers. The A-Class Sedan, however, is tailored to the standards of customers who want a compact and practical sedan, while the CLA is aimed at those for whom convenience is not crucial, but the attractive appearance certainly is.

So the A-Class Sedan is now what was once the C-Class, or rather the smallest and most affordable Mercedes sedan, and that in itself is an attractive idea. Clearly, the most affordable should not be interpreted as cheap either, as the A-Class has been bringing more equipment and technology over the generations, and is clearly priced very clearly at the top of the premium segment.

What is the point of the A-Class in Sedan form is the fact that the three-volume design really has its appeal to all customers whose classic A-Class is still a tad too small. Although the compact sedan is only 130 mm longer and shares the same wheelbase, it was enough to make the small sedan a significantly higher usability dose.

The biggest magnet for Sedan buyers is certainly the boot, where Mercedes-Benz really paid special attention when designing this model. Specifically, the design of the A-Class Sedan and the fluid lines with the three-volume form made it one of the most aerodynamic production cars of all time with a Cd value of 0.22. In addition, this time they really carefully designed the trunk itself and its lid. With a total volume of 410 liters of volume, the Sedan’s boot is larger by 40 liters than that of the compact, and is truly well-suited for all family needs. Equally important, the designers of Mercedes-Benz were able to remedy the biggest disadvantage of small three-volume sedans. A small tailgate is often an obstacle to the usability of the boot in a car like this,

The interior of the A-Class Sedan offers the same amount of space as the compact model, making entry into the rear seats a little easier. The thoughtful design of the seats and the trim provided a few extra inches, so staying and traveling in the back seats is quite comfortable and with plenty of space.

The A-Class reveals that it is still an entry-level model of interior quality. Although everything is well assembled and fitted, it is still dominated by slightly harder materials and coarser plastic liners than we used to see in Mercedes. It is similar to the seats that are well designed, but in one Mercedes we expected a slightly softer and more comfortable seats.

We don’t like it: the visibility, the comfort of the front seats, the quality of certain materials inside, the price …

What justifies the A-Class star on the mask is the arrangement of the driver’s seat, which by no means lags behind the larger models, on the contrary. Although we are not fans of full digitalisation, Mercedes has done a great job here and most importantly a fully original cockpit that looks like a 2020 compact.

In the spotlight, of course, is the long, high-resolution screen, which consists of two screens, the first displaying data of all driving instruments in several styles and modes and the second displaying all the functions of a lavish infotainment system above the center console. With beautifully designed circular vents, and the abundant use of LED ambient light, the visual atmosphere in the A-Class equals the much more expensive and larger models of this brand. Of course, for the full impression, there are also extended features of the multimedia MBUX system as well as the ability to issue commands by saying the password “Hey Mercedes”.

On the ride, the A-Class Sedan showed an excellent blend of comfort and dynamism. Of course, the dynamic should be taken with reserve, because this is still a basic diesel model without any sporting impurities. Still, the A-Class Sedan drives really fine, is comfortable, and with its slightly higher profile tires it remains very manageable and stable in turns. The good driving characteristics are also due to the fact that the A-Class is not too heavy, so the modern turbodiesel is not too big in the nose of the car, so the understeer is not pronounced.

The engine is one of the biggest reasons why this A-Class Sedan is a very attractive family car. Specifically, under the 180d code is a well – known 1.5-liter turbodiesel. The engine that Daimler, in collaboration with Renault, has prepared for Mercedes models is definitely one of the best common-rail diesel engines of this volume, and the fact that it has been present in various models for almost 20 years speaks volumes about it.

And here is spectacular excellent, and 1.3 tons of heavy sedan version with 116 hp and 260 Nmlaunches with ease. The elastic turbo diesel with a modern dual-clutch gearbox is a recipe for an easy ride that can be dynamic enough if needed. Particularly prominent is the engine performance and excellent sound insulation, which is why the noise level in the cabin and at higher speeds is really minimal.

Of course, the biggest advantage of this engine is its very modest fuel consumption. Like many times before, we have been consuming really minimal amounts of diesel here, so we ended the test in mixed driving with an average of only 4.9 liters per 100 kilometers, and on the open road we easily lowered that average to below four liters. With excellent engine performance, this is certainly due to the superior aerodynamics that make the A-Class Sedan simply glide through the air.

As we said, the most affordable ticket to the consciousness of a Stuttgart star is not necessarily cheap. The A-Class is no longer a cheap car, and with the new generation and extensive options at its disposal, this is even more pronounced. So the base price of an A-Class Sedan with this engine with just under 60 thousand marks at first and does not sound excessive, but then it should be remembered that there will be no “makeup” such as LED lights, automatic air conditioning and a full range of driving aids. When this package of equipment is expanded with some important but also slightly less important details, the price easily jumps to over 80 thousand marks. With this in mind, it is advisable to focus on gasoline models. Powered by a high-performance 1.3-liter turbocharger, they cost an average of 7 to 10 thousand marks less.