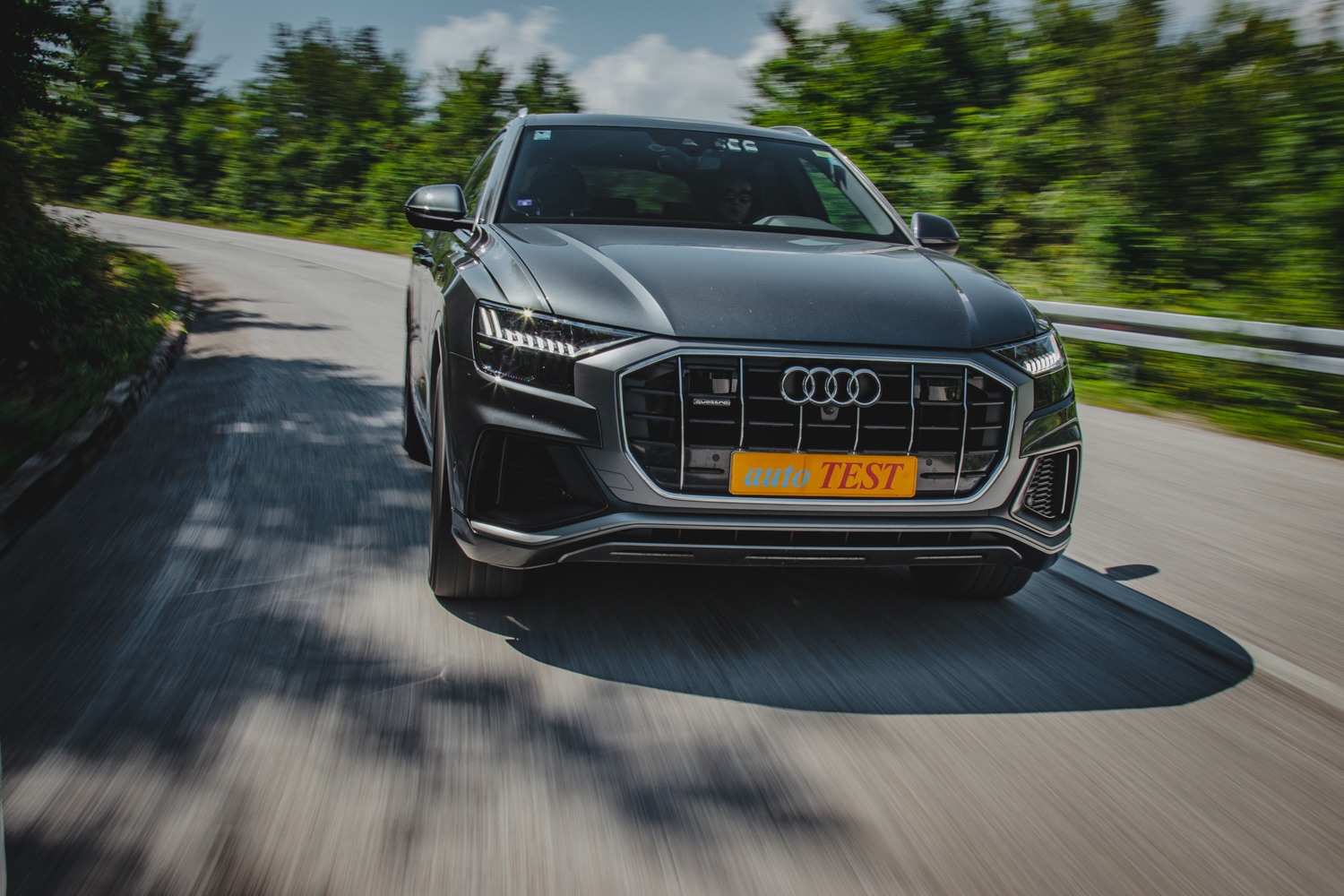 The Audi Q8 with the 3.0-liter V6 TDI turbodiesel of 287 hp is hidden behind the 50 TDI label and it’s actually clear why everyone wants it more than the sedan or the sibling Q7https://www.youtube.com/embed/pmH4HU5V574?feature=oembed

It’s no longer as cool as when it first appeared, but the Audi Q8 still looks fantastic. Especially in this color. That’s good news for Audi’s new design which now seems to last a lot longer than before.

The Audi Q8 is rightly called the “Godzilla” because it is as big as a small bedroom. It is two meters wide and less than 5 meters long, and by the way it is about 25 cm higher than the average vehicle. Yet, no matter how you look at it, it’s fantastic with that falling back end that looks so irresistible. It’s hard not to wonder: and where is the place of the Q8 next to the old and huge Audi Q7 left in its shadow? Well, the difference is only 3.5 centimeters, because the Q8 is so much shorter than the coupe that, due to the lower center of gravity, but also the uncalibrated chassis, drives completely longer than the Q7.

The usability of the Audi Q8 in terms of agility and dynamics is at a high level largely due to the swivel rear axle. At higher speeds, the rear wheels turn in the direction of the turn, and at lower – in the parking lot – opposite to the front to reduce the turning circle. And because of that, it is smaller by a full meter, but it is still about 12 meters, which is probably normal for this class.

The instruments in front of the driver are 12.3-inch and can display anything you want. From navigation, trip computer information, main instruments, and even multimedia communication. This is the corner for the driver that is best used when a 3D navigation map is stretched over it. Then you feel like you’re flying a helicopter.

The central upper screen is 10.1 inches and here we look again at the navigation, but also all the infotainment options and all possible system settings of which there are over 400. This screen, as well as the one below it, have a haptic function. The lower screen seems to be the least important, but it doesn’t just adjust the air conditioning. No, you can hide your shortcuts on it for some special functions or addresses in the navigation, and it will also serve as a desk. Namely, because of its slope and position, this screen is great for writing addresses in strokes on the screen.

It was created to impress and win over with its first impression, so it does, but not just with its extravagant design. It’s an SUV that like racial sports coupes doesn’t have window frames, but still when you slam the door you’ll experience the best sound insulation.

Of course, the key is not taken out of the pocket in cars like this, and the protocol before the moment of driving is very inspiring. Flop, first the silent door closes, just below the relaxing angle of the elbow then you choose the driving programs and the height of the chassis and the first hook starts…

This is a 3.0-liter turbodiesel with 287 hp (at 3500 rpm) and 600 Nm (at 2250 rpm). This engine is pretty well balanced anyway, besides it is a harmonious V6-construction, and then there is the great insulation, both of the cabin and the engine compartment. That’s why the roar that the engine delivers to the cabin announces the power brilliantly.

If you’re going to be impressed that from a standstill the Q8 is ready to almost jump into gear, that’s another matter, but we’d love to go super fast but at the same time gentle. The Q8 is not far from that, so for speed and fluidity during the start the driver has to practice a bit.

It is huge and heavy (2270 kg), but the Q8 is still lighter than, say, the Mercedes GLE Coupe, and it also has a larger wheelbase – which makes driving on long distances extremely safe and stable. Then it’s fantastic, so when you soar above 70 km / h you won’t want to stop.

Higher speeds fit and automatics, which in this case has 8 gears and works satisfactorily fast because it successfully copes with a huge comet, weighing over two tons, and even permanent all-wheel drive. When you squeeze an Audi Q8 50 TDI like this, you will start calibrating according to some new standards.

In addition to driving characteristics, the Audi Q8 completes its coupe story in the SUV segment with brakes. It only needs 34 meters at 100 km / h, and in addition to the length of the road, the feeling of the brake and the possibility of handling are also commendable. However, the large mass of the vehicle should not be forgotten, as the Q8 itself will remind you. It certainly won’t occur to you at first, but with the Audi Q8 you can also go off-road. If you put on a good off-road tire we have no doubt they would go far. Partly due to the air suspension that can raise the body to 254 mm, which is even 9 cm higher than the position for driving on the highway (16.5 cm).

When there is a lot of traction under the wheels, the quattro drive to the rear wheels “pushes” up to 60 percent of the torque and this is nicely manifested when you start to connect the tied turns. The driving theory of mass shifting between axles and gas balancing works well, but again – this is a very heavy car.

This is not only a diesel but also a mild-hybrid. You’ve heard for sure, but no, you’re not going to ride on electricity. A 48-volt electric motor-generator is connected to the crankshaft of this engine, which will help when needed. And what does that mean? It is powerful 12 kW, so when you drive at speeds from 55 to 160 km / h, it can happen up to 40 seconds that the engine shuts down, so that the electric motor maintains that cruising speed.

And how much does this ugliness cost? The lowest consumption we managed to drive with is about 7 liters. A realistic everyday life that bypasses city crowds will mean an average of between 9 and 10 liters, and if you enjoy it a little, count on the computer to write between 11.7 and 12.2 l / 100 km.

With the charisma of a Lamborghini Urus and almost equally brilliant driving characteristics, the Q8 is spacious and usable enough with its large rear bench and 605 liters of luggage space.